Chaidari is located 9 Km from the center of Athens. The concentration camp of Chaidari has so far occupied a marginal position in Greek historiography. Chaidari is a densely populated area on the western side of Athens. The symbol chosen by the municipality of Chaidari was inspired by the camp and depicts Block 15, its isolation ward and prison.

During the italian occupation which began in 1940, a military camp was built in the area, which operated for only a few days. From September 1941 the Sicherheitdienst (SD), a special nazi security service, had command of Chaidari which initially served as a transit camp to major concentration camps in Europe, especially Auschwitz and Dachau. It functioned primarily as a detention center for internal poltical opponents.

First camp commander was Sturmbannführer Paul Radomski, which, according to his SS personal file, was "primitive in all his thoughts and feelings". Chaidari was notorious for malnutrition, forced labor, torture and liquidations. It was called the "Bastille of Greece". Until the closure of the camp in September 1944, around 20.000-25.000 people were imprisoned there. Many of the prisoners were deported to concentration camps in Germany or Poland. 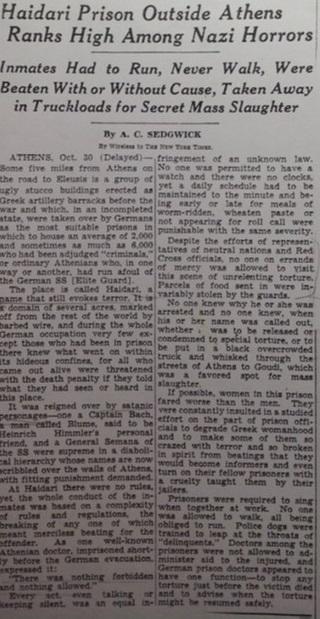 After the war, Chaidari became a symbol of resistance during the occupation. Access to the camp was denied for years. Today, admission to the camp is permitted only for Block 15. Since the late 1940s, the camp has been used by the Greek Army, which established an infantry heavy weapons (ΚΕΒΟΠ) and a communications school (ΚΕΔ) on the grounds. Only in the 1980s, with the election of the socialist party PASOK to power and the passing of laws on the recognition of the Resistance and on national reconciliation, was the camp opened to annual commemoration events. Block 15 has since been declared a national monument site, and features in the logo of the Chaidari municipality.